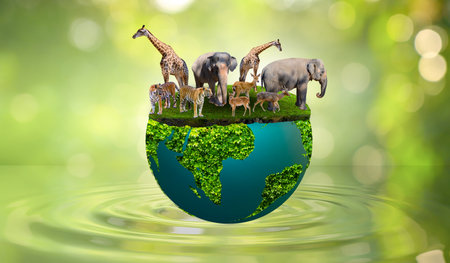 Since 1998, the independent organization WWF France has worked daily to protect the environment around the world. Every two years, they publish a “Living Planet Report” to measure the state of biodiversity on the planet.

According to this year’s report, the first important point concerns the disappearance of many species. According to the LPI (Living Planet Index), figures show that between the 1970s and 2018, the average size of wild vertebrate populations decreased by 69%. This means that in less than half a century, more than 32,000 populations of birds, reptiles, amphibians, fish or mammals have fallen by more than two thirds.

Faced with this scourge, no region of the world is spared. But it is in Latin America that there is the greatest decline, or 94% of wild species. The freshwater populations are not doing any better, since the decline is 83%.

These phenomena are also found elsewhere in the world: the population of the leatherback turtle (the largest living marine reptile) which is becoming scarce, i.e. a decrease of more than 60% in its numbers in the Northwest Atlantic; just like the green tree frog, which has been in sharp decline for several years in France.

They claim that “All over the world, the numbers of emblematic species, as precious as they are essential to the balance of our ecosystems, are in free fall”.

We can then speak of a “double global emergency”. Indeed, we talk a lot about climate change but little about the disappearance of habitats and wild species, even if they are closely linked: natural environments are degrading, in turn releasing greenhouse gases contributing to global warming.

Ideally, the rise in temperature should be limited to 1.5°C; in which case it will be the main cause of biodiversity loss in the years to come. It has already been proven that these have led to species extinctions and massive mortality phenomena.

Humans indirectly provoke and threaten the well-being of current and future generations. Until we succeed in linking these events, no resolution will be possible.