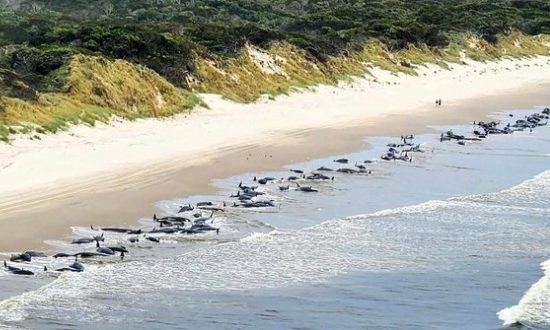 On September 20, 2022, Australian rescuers made a gruesome discovery… nearly 200 dolphins died stranded on a beach in Tasmania. The causes of this major grounding are not known, although it is a phenomenon that occurs regularly in the region. Indeed, it is known that this beach is located on the rugged West Coast of Tasmania and that it is relatively exposed and swept by waves.

Out of 230 cetaceans discovered on this beach, only 35 were still alive. Mr. Brendon Clark, director of operations for the state wildlife service, present at the scene said that it was a disaster in view of the very high mortality rate. He also specified that the environmental conditions were not totally favorable and that this could have consequences on the way of life of the animals.

Aerial images show all these mammals scattered along the beach, in contact with the cold waters of the Southern Ocean. Residents have nevertheless tried to cover the surviving animals with blankets while spraying them with water regularly to save their lives.

Almost two years ago to the day, the area was also the target of another massive stranding, involving more than 500 cetaceans. More than 300 of them had died despite the collective effort of dozens of volunteers who also struggled in the freezing waters of Tasmania.

What hypotheses are plausible following these disasters? The real causes are not known, we can suggest that it would be caused by these groups of cetaceans approaching too close to the coast in search of food.

Second hypothesis, being so-called “sociable” animals, they follow the members of their group who go astray and find themselves in danger. This sometimes happens when it comes to old, sick or injured animals, all members then try to respond to the distress signals launched.

Last hypothesis that can be argued, the gently sloping beaches in Tasmania disturb their sonar and make them believe that they are offshore.

As for the cause of this stranding, the biologist Carlyon Kris opts for a “misadventure”, more precisely the search for food near the shore and the trap closing due to the low tide. He insists on the fact that it is only a theory since no fact is proven.