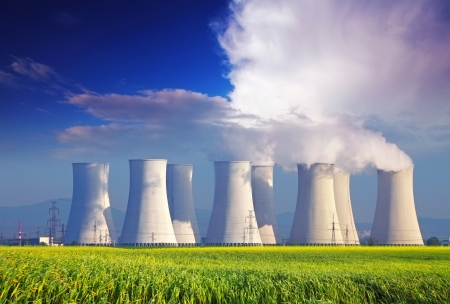 The nuclear fission reaction has been mastered industrially for the production of electricity since the 1950s. Today, it is the fission reaction of uranium atoms and the chain reaction which results from it, which are used within French nuclear reactors.

OPERATION OF A NUCLEAR POWER PLANT

The general operating principle of a nuclear power plant is the same as that of a conventional thermal power plant: it involves producing water vapor to turn a turbine coupled to an alternator which produces electricity.

The fuel is mainly made up of radioactive fissile uranium nuclei, which, breaking under the action of neutrons, will release a large amount of energy, in the form of heat evacuated from the reactor by a first pressurized water circuit. , the temperature of which rises; the heat is then transferred to a secondary circuit where the water is transformed into steam, which drives turbines and makes it possible to produce electricity. The part of the nuclear power plant to produce and control a nuclear fission chain reaction is called nuclear reactor.

AMOUNT OF ENERGY PRODUCED BY A REACTOR

The 56 PWR reactors in the French fleet all use the same technology and are technically similar. They are located on 18 sites, each plant comprising from 2 to 6 reactors:

Despite the dynamism of the sector, the French nuclear fleet is currently facing a complex situation. Indeed, since the end of April 2022, almost half of the reactors have been shut down (there are only 27 reactors currently in service). This is a historical record in the industry.