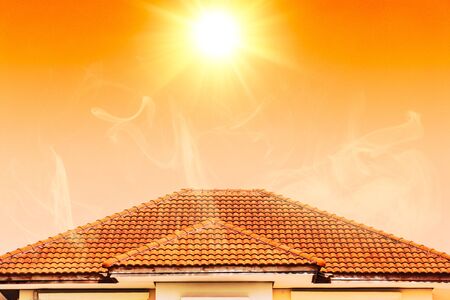 Every year in France, drought causes colossal damage to our homes, which can raise the bill to several hundred million euros. Global warming is clearly increasing the phenomenon, thus endangering a very unequal insurance system where victims are struggling to assert their rights.

Example in Ain during two weeks of heat wave at 35°C, the foundations of a house gave way, causing huge cracks in the ground up to the roof. Indeed, the construction on a clay soil (unsuitable for change), leads to a rupture of the supports following the phenomenon of “shrinkage-swelling”.

This phenomenon can be explained as follows: like a sponge, the clay soil dries out during high temperatures and when there is no rainfall, but when it rains, they become “malleable and flexible” again. These sudden changes in the ground can therefore cause serious damage to buildings.

This has been known since the 1980s, so much so that it has been recognized as falling under the natural disaster compensation scheme. This is the second cause of compensation after floods.

According to the French Insurance Federation, between 1988 and 2013, no less than 598,000 claims relating to drought were compensated for a total cost of approximately 7.6 billion euros.

These hazards may still be visible several months or even several years after the disaster. People seeking compensation must prove that it was the drought that caused the apparent problems.

Indeed, it happens that many compensation files are refused. Experts are dispatched by the said insurance companies, they point out certain circumstances such as a tree too close to a house, a leak from a pipe or the heating of the frame due to heat and use it as a conclusion. . These victims therefore enter into “the battle of the experts” because without a second opinion carried out by a professional, the chances of obtaining compensation are less.

But taking the steps to win the case remains very expensive: the payment of a deductible, the financing of a soil study, heavy administrative procedures, so many barriers that prevent some victims from asserting their rights. This is particularly the case for the elderly, remaining in their cracked houses “like sieves”, without any means of obtaining repairs.

For successful files, the solution lies in the installation of micropiles, metal tubes taking the load of the house to distribute it on hard ground that is not affected by drought. The price of this work depends on the size of the house, the type of land and the number of micropiles to be installed. In order of idea, it can cost between 20,000 and 250,000 euros.

Drought is now tending to become a “norm” which will make it more difficult to access compensation since this phenomenon will no longer be classified as unpredictable, nor as a characteristic of natural disasters. The Senate is today discussing the possible creation of a special scheme for claims due to drought.