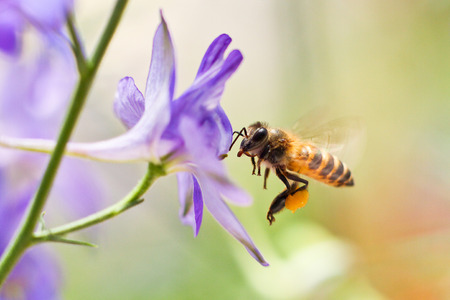 Everyone is impacted by climate change, including insects… In times of drought, bees struggle to find the essential nectar for honey production, which is a concern for many beekeepers.

“The climate conditions the production of nectar by the flowers”, explains Yves Le Conte, director of the bees and environment research unit at the National Research Institute for Agriculture, Food and the Environment in Avignon. .

Starting with the rain which “washes” the nectar from the flowers and limits the outing of the bees. Last year a beekeeper estimated that he had made only 20% of his honey harvests.

Then comes the drought, during which the flowers no longer produce nectar. But our friends the bees need this nectar and sugar to produce their honey. In addition, they go less in search of nectar and favor the search for water, which therefore limits the foraging time.

Heat, on the other hand, affects the amount of pollen emitted by certain plants. Sometimes, bees struggle to find it, thus limiting the supply of nutrients essential to their good health: they become more fragile and will have more difficulty getting through the winter.

In a hive, the ideal temperature is located at 34°C. When it is too hot, the bees fetch water and flap their wings to cool the air inside. But sometimes this is not enough, thus causing the melting of the wax and the death of the maturing larvae.

These larvae need a temperature between 32° and 35°C to survive, while adult bees can tolerate temperatures up to around 50°C.

Global warming also disrupts the flowering periods from which beekeepers organize their honey harvests. They adapt to the climate on a daily basis, but this has become more pronounced in recent years.

As a solution, some beekeepers practice transhumance, consisting of moving the hives in summer to areas more favorable to bees. They recognize that it is a material cost and an additional investment in working time. But thanks to this method they can diversify their products: they do not make the same honeys as in the plain.

These beekeepers are in search of yield but also care about the well-being of their precious allies. It is imperative to act as quickly as possible to limit climate change as much as possible today and in the years to come.