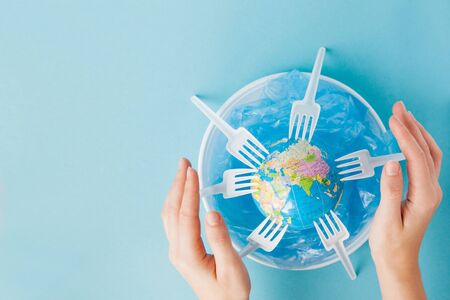 Plastic components pollute the environment and are also harmful to wildlife and humans.

Indeed, the smaller the particles, the more dangerous they are, they are called “microplastics”. They are used in cosmetics but are also present in the food chain. As for the effects on animals or humans, these could not be clearly identified.

Microplastics are plastic particles with a dimension of less than 5mm. Today, the majority of those we find in our polluted environment come from cosmetics: present as granules or binding agents, in particular in scrubs, toothpaste, shower gels, make-up, etc.

At present, there is no obligation for product labeling on the part of manufacturers, it is impossible to know whether a particular product may contain it or not.

A second type of microplastics are formed by the disintegration of mountains of waste polluting the oceans. They contain many phthalates and plasticizers often cause endocrine disruption, toxic and even carcinogenic effects.

These small plastic particles are like magnets for all environmental toxins, their surface accumulates a lot of other substances. It is noted that the toxic concentration of plastic can be up to a hundred times greater than that of the surrounding water.

We now know that there is no longer any place in the world free of microplastics. They even appear in the food chain. Marine animals confuse them with food which, once swallowed, releases the toxins since these are not excreted and therefore accumulate in the tissues. These marine organisms are then eaten by larger animals and so on. It therefore becomes a “universal food” since animals and humans are concerned. Traces have even been found in milk, beer or even drinking water.

But why do we use this kind of plastic? It is indeed inexpensive and very versatile…

It is imperative that a general awareness be put in place, so that each person becomes a major player in improving our quality of life.

Alternative solutions to these plastics exist, however, such as mineral substances such as salt, clay, chalk or even grape seeds, walnut shells, etc. So what are we waiting for change?!