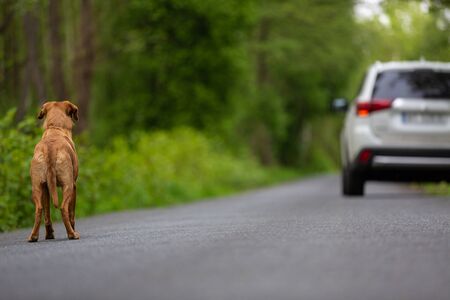 During the summer of 2021, the SPA had recorded a sad record of abandonments, there were 16,894 animals collected by volunteers between May 1 and August 31. This represented a 7% increase from the summer of 2019.

The most affected animals are cats: more than 850 were welcomed in 2021 at the SPA, a very worrying increase of 82%. These figures are explained by the unregulated “business” of the “object animal”, but also by the lack of sterilization and identification of the species.

Dogs meanwhile, were about 4,400 to be collected in shelters last summer. Compared to previous years, there had been a significant drop in dropouts concerning them.

Faced with these abandonments, the SPA had decided to act. At the end of September 2021, a review of the law on animal abuse was carried out before the Senate. This should allow all associations, including the SPA, to request the withdrawal of article “3bis” prohibiting small associations without shelter from collecting and “saving” these animals.

New articles are added to it: the ban on the sale of animals in pet stores and better supervision of sales or transfers on the internet by reserving animals only from professional breeders.

According to a survey conducted in 2010, the main reasons for abandoning dogs and cats were: unexpected litters, changes of residence, economic factors, loss of interest in the animal and problematic animal behavior.

The least frequent reasons were: the end of the hunting season, the allergies of a family member, the birth of a child, a stay in hospital or the death of the master, holidays or the fear of contracting toxoplasmosis during pregnancy.

These abandonments are far from being eradicated, but the various awareness campaigns carried out among the populations are beginning to have an effect. Adopters seek advice from professionals, particularly on the involvement in terms of time and money.

Indeed, if you are considering adopting and want to have the foundations of a solid, lasting and happy relationship with your pet, here are some tips to consider:

1. The decision to have a pet should be taken as a family, distributing the different tasks and responsibilities among all family members;

2. Find out and identify the type of animal that will best suit your needs, your tastes, your lifestyle and the size of your household: a dog, a cat or another animal; a male or a female; a puppy or an adult; in the case of dogs, small, medium or large size…

3. Teach the animal, especially dogs, basic training commands. Thus, cohabitation will be easier and you will enjoy the company of your animal much more.

4. Ask your veterinarian for advice on sterilization in order to not only be a responsible master, but also a “responsible parent” and thus avoid unwanted litters.