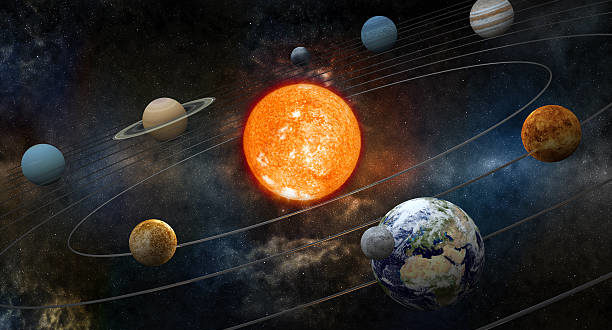 A planet is a star with three major characteristics: to be in orbit around a star, to have a more or less spherical shape and to have created a vacuum around it (that is to say, to no longer have a body of size comparable to its own in a close orbit).

The main planets in our solar system are:

Surface with many craters, due to meteorite impacts / presence of ice at the poles / non-existent atmosphere except for the presence of traces of gas / large temperature differences between -172°C to 427°C / no satellite.

Largest planet in the solar system / no trace of water / significant atmosphere composed of hydrogen (H2), helium (He), ammonia (NH3), methane (CH4) and ethane (C2H6) / temperature outside the clouds around -153°C / strong winds that can reach more than 500 km h / 67 known satellites including Ganymede, Lo and Europe.

Presence of thousands of colored rings made of ice and rocks / no trace of water / significant atmosphere composed of hydrogen (H2), helium (He), ammonia (NH3) and methane (CH4) / temperature outside the clouds about -185°C / 62 known satellites including Titan.

Qualified as an ice giant / presence of greenish gases forming an atmosphere of hydrogen (H2), helium (He) and methane (CH4) / no trace of water / temperature outside the clouds around -214°C / 27 known satellites.

Qualified as an ice giant / presence of bluish gases forming an atmosphere of hydrogen (H2), helium (He) and methane (CH4) / no trace of water / temperature outside the clouds around -225°C / strong winds that can go to more than 2000 km h / 14 known satellites.

A. Terrestrial planets, essentially composed of rocks and metals, also possessing a solid surface. This is the case for Mercury, Venus, Earth and Mars, which have several solid envelopes (usually three: the crust, the mantle and the core).

B. The Jovian planets, essentially composed of gaseous elements and are the largest in our solar system. They have a thick atmosphere (even if they are gaseous) and would probably have a solid rocky core according to scientific research. This is the case for Jupiter, Saturn, Uranus and Neptune.

C. Dwarf planets, a recently created category, have the main characteristics of planets, but with the difference that they share their orbit with other bodies such as asteroids. Below are the five planets concerned:

The most massive known dwarf planet, located beyond the Kuiper belt, discovered in 2003 and identified in 2005.

The largest known dwarf planet, located after Neptune in the Kuiper belt, discovered in 1930.

Located in the Kuiper belt (after Neptune), discovered in 2004.

Located in the asteroid belt between Mars and Jupiter, discovered in 1801.