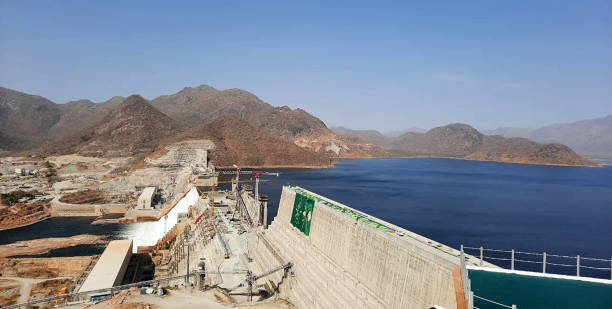 The great “Renaissance” dam is at the heart of a diplomatic conflict between Sudan, Egypt and Ethiopia. Located on the Blue Nile, about 30km from the Sudanese border, it is 145 meters high and 1.8 kilometers long.

A senior official present at the inauguration quoted “this great dam was certainly built by the Ethiopians but it is for the benefit of all Africans, so that our African brothers and sisters can benefit from it”.

The project named Gerd (Grand Ethiopian Renaissance Dam), has been since the launch of the project in 2011, a source of conflict with Sudan and Egypt, both tributaries of the Nile for their hydraulic resources.

Egypt then invoked a “historic right” to the river, guaranteed since a treaty signed in 1929 with Sudan. She had obtained a right of veto on the construction of projects on the river. Then in 1959, after an agreement with Sudan on water sharing, Egypt had allocated a quota of 66% of the annual flow of the Nile against 22% for this one.

Ethiopia, not having taken sides in these agreements, felt in no way linked with these two countries. Thus, in 2010, a new treaty signed by the countries of the Nile basin saw the light of day, despite the opposition of Egypt and Sudan, abolished the Egyptian right of veto and authorized new projects of irrigation and hydraulic dam on the river.

The UN was seized last summer to advise countries to continue their talks under the leadership of the African Union (AU). Cairo (capital of Egypt) and Khartoum (capital of Sudan), worried about their water supply, asked Addis Ababa (capital of Ethiopia) to stop filling the dam.

Ethiopia nevertheless proceeded last summer to phase two of the filling of the dam, considered one of the largest in Africa with a production of 5000 megawatts.

Egypt would like to have its say, because indeed it is both the economic and military power of the region and is 97% dependent on the Nile for its water supply. With its 100 million inhabitants, it has attempted negotiations regarding the filling of the dam: over 15 years instead of 5 to 7 years. It is also ready to intervene militarily.

Sudan, more discreet, had observed these negotiations from afar without participating in them because Ethiopia had promised to sell it electricity at cost price.

If we look at the situation objectively, Egypt is completely wrong about this affair. Indeed, the sharing of waters stems from a leonine treaty of 1959 which left almost nothing to Ethiopia and very little to Sudan, Cairo meanwhile had reserved the lion’s share.

Moreover, Egypt is showing bad faith: filling the dam after the rainy season does not threaten its water supply at all, and its dam in Aswan is filled to the brim and contains enough water.

In truth, what does not suit Egypt is the fact that a new African power is being born since before that, it controlled the region and always overlooked it.

Ethiopia and its 100 million inhabitants are competing with Egyptian power.

Indeed, thanks to this dam, Addis Ababa (capital of Ethiopia) obtains a voice in the discussions on the future of the region and this is what clearly upsets Egypt.