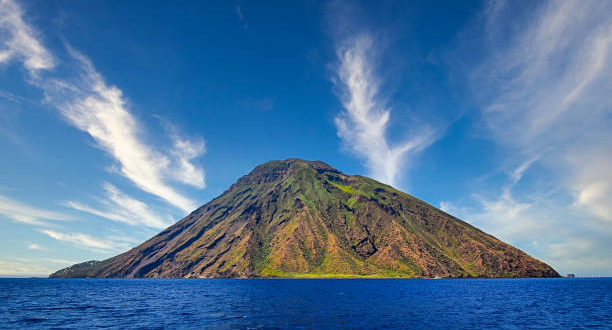 The Stromboli – island of Stromboli, Sicily

Standing on a circular island located between the coasts of Sicily and Italy, it is easily distinguishable on the horizon. On these slopes, you can see the recent lava flows that have taken place, more particularly on the northwest slope. He is described as “Majestic”, the inhabitants have personified him and call him “him” (Iddu in Sicilian).

The Mosychlos – island of Lemnos – Greece

According to Greek mythology, this island located in the Cyclades, is home to the forge of the god Hephaestus (son of Zeus and Hera, god of volcanoes and metallurgy) in the very heart of the volcano. This one is extinct nowadays, it modeled surreal landscapes.

One of the most famous lagoons in the world, Mount Otemanu with its moss-covered rocks, the highest point of the island. The volcano, now extinct, is made up of four fragments, each forming a spectacular relief, especially from the sea.

The volcanoes of the Aleutian Islands – Alaska, USA

Over nearly 1800 km in the part of the Pacific Ring of Fire, in the Aleutian Islands, there are about fifty famous and very singular volcanoes: such as the famous Mount Pavlof, the crater lake of Kasatochi Island, the stormy Augustine volcano or the islands of the Four Mountains, from which Mount Cleveland notably emerges.

It is not officially declared extinct, but it has not experienced an eruption since 1570. Vegetation has regained its rights: its slopes are covered with a cloud forest and tropical flora which has become rare in the Nicaragua. Easily accessible, it offers superb views of the city of Granada and Lake Nicaragua; proof that a walk on the side of a volcano is not necessarily perilous.

Cape Verde’s highest point, also the hottest point: this red volcano regularly erupts. Ribbed landscapes on the side of the island of Fogo, inhabited on the coast side, another of its slopes shelters a vineyard and the caldera of Chã das Caldeiras is one of the most impressive views, allowing to appreciate on land this what the Moon or Mars may look like.

For 200,000 years, volcanoes have populated the island of Sao Miguel, in the Azores. Three of them have flasks on which land is cultivated and vegetation has flourished. The lakes of Fogo, Furnas and Sete Cidades are not the only places shaped by multiple eruptions: on the island of Faial, the caldera of the same name again bears witness to the seismic activity of the Azores archipelago, but also of the impressive beauty of its sumptuous “valleys” which one can nowadays survey without fear.

Southeast of the island of Hawaii, the mountain of Kilauea is home to one of the most famous volcanoes in the world. Its agitation and the violence of its eruptive episodes have made it a place of choice for studying the various seismic phenomena. Endowed with great symbolic importance in Hawaiian culture, Kilauea allows you to observe quite unique landscapes, such as those where “Pelé’s hair” emerges, these volcanic rocks that look like thin filaments.

A volcano within reach of the city: such could be the definition of this peak, located on the island of Kyushu in Japan, just a few minutes from the city of Kagoshima. You can observe it at leisure from the adjoining bay and the surrounding buildings. Its presence on the horizon, magnified by its size, makes it as interesting a place to visit as other famous Japanese sites, such as Mount Fuji or Mount Unzen.

Be careful! The Poas crater is indeed home to an acid lake, from which the sulfuric vapors escaping can be dangerous. More than 11 million years old, this volcano, located in the northern part of Costa Rica, hosts another crater, extremely clear, surrounded by jungle. Between lunar landscapes and lush vegetation, it offers a composite panorama of the rarest.