Since the creation of the OMPE in 2013, elephant protection has always been part of our battles. Our dossier on the elephant recalled how much the populations of this animal are threatened, as well in Africa as in Asia. Imposing but fragile, the elephant is disturbed by the fragmentation and destruction of its habitat and the illegal trade in ivory, a cruel but lucrative activity for some. In its fight for the protection of elephants, the OMPE wishes to support Joëlle Delange, writer of the Var and fervent activist for the animal cause.

New measures to save elephants…

In 2018, there were about 415,000 elephants in Africa. Habitat destruction and poaching are the main contributors to the decline of their population. Fortunately, awareness is emerging, new actions are emerging and action is being taken. In Kenya, for example, the number of extinct elephants has dropped to 396 in 2018 compared to 727 in 2017. Strengthening the fight against poaching, intensifying awareness and tightening the law against poaching and marketing of products of ivory have allowed this major advance. Indeed, Kenyan law provides for a fine of 170,000 euros and a life sentence. But, for the new Minister of the Environment, the law is not yet sufficiently dissuasive.He wants to put in place an even harsher sentence : the introduction of the death penalty for poachers. If the Kenyan authorities want to protect elephants, it is also because their presence is an important part of the country’s economy.

In January 2019, Tanzania also took steps to protect elephants from poaching. In the coming months, the Serengeti National Park (one of the largest preserved ecosystems on the planet) will be equipped with surveillance cameras equipped with artificial intelligence (AI) to flush out poachers. Today, only 150 rangers are responsible for monitoring this 14 763 km² national park. The TrailGuard AI micro camera will ship a chip and alert the guards if a suspicious individual is present. Cameras are already starting to be positioned, in partnership with the Leonardo DiCaprio Foundation.

Recently, the OMPE had the pleasure of meeting Joëlle Delange, writer of the Var and engaged in the animal cause for many years. Fervent friend of our friends the animals, she passes a pedagogical message and engaged in each of her books, true “advocacy for nature”. In 2017, Joëlle Delange publishes « Shukuru et les braconniers », the story of a small elephant seeking to save his flock of bandits. An elephant that the author had the chance to meet in real life and that made him want to educate children about the danger that threatens elephants. 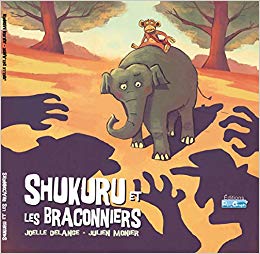 Much more than a children’s book, the book is also a teaching manual that teaches what we need to know about this endangered species. This book has been produced in partnership with the Kenyan nursery « Sauvez les Éléphants d’Afrique » (SEA). Like OMPE, Joëlle Delange wants to make things happen, to sensitize and motivate the new generation. Gilles Lazzarini and his team have decided to help him, through this article and a next petition… To follow !